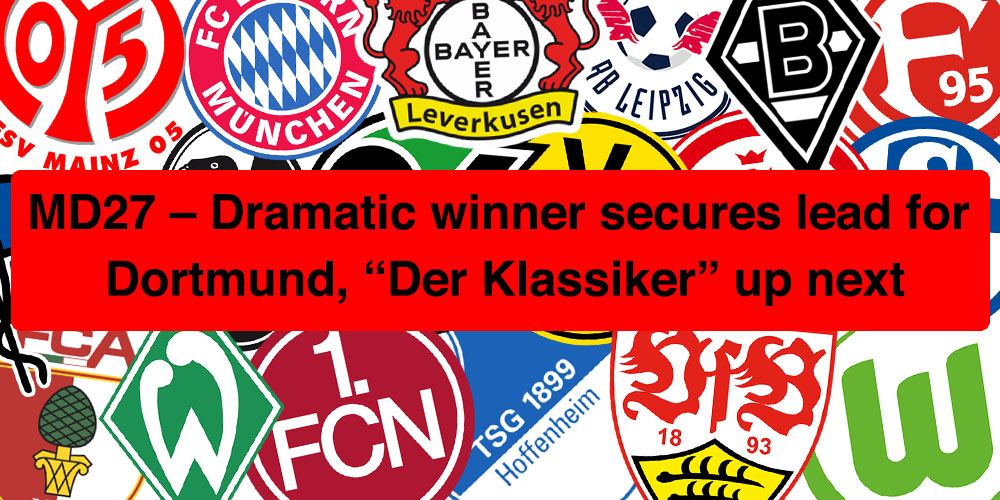 It’s astonishing how quickly things can change. In matchday 27, Bayern beat Mainz 05 6-0 whilst Dortmund laboured past Hertha Berlin, and the Bavarians appeared to be in the driving seat in the title race. Fast forward two weeks, and Munich’s draw against Freiburg, coupled with Dortmund’s late victory against Wolfsburg, puts BVB back on top. With Der Klassiker up next, Lucien Favre’s side have a two-point lead. Once again, it is all to play for!

There is also a lighter feeling around Nürnberg this week. After 21 games without a victory, they finally triumphed on Saturday against Augsburg. The 3-0 scoreline gives them momentum going in to the huge game against Stuttgart. Should Der Club win that, they will be just one point away from the relegation play-off spot after looking dead and buried.

We cover all of the weekend’s action, as usual, before moving on to our In Depth section. Hannover 96’s Martin Kind stepped down as President of the club last week after years of protests conducted by the club’s Ultras. We discuss why Kind is so despised in Hannover and the tensions behind his departure.