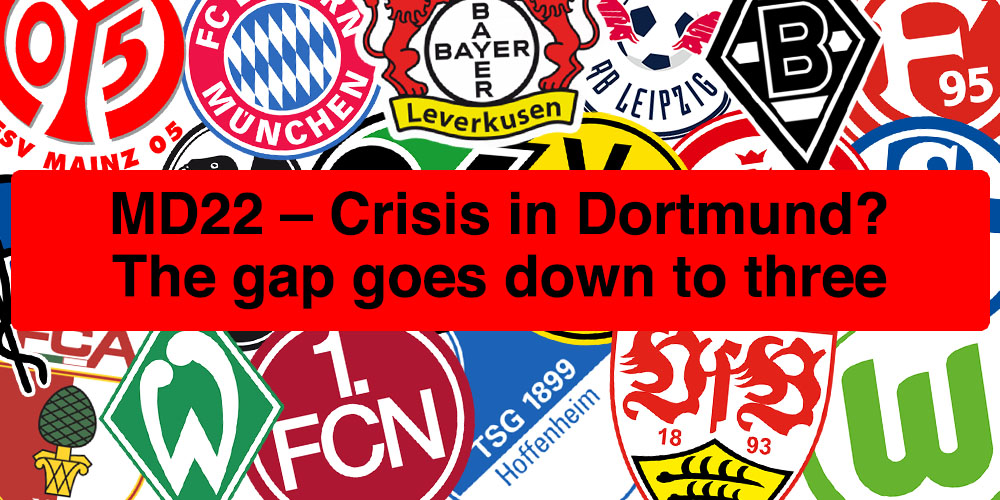 Two weeks ago, the gap was seven points. However, now just one win separates Borussia Dortmund and Bayern Munich at the top. Dortmund’s 0-0 draw against bottom club Nürnberg was disappointing to say the least. After Bayern had already dispatched Augsburg with a hard-fought if unspectacular victory, it seems that Lucien Favre’s men felt the pressure against a side that has now gone 16 games without a victory.

Elsewhere, Bayer Leverkusen, Hoffenheim, Leipzig and Wolfsburg all won in the race for the European spots. Only Mönchengladbach and Frankfurt, who faced each, failed to triumph out of the sides below the top two. Leverkusen were particularly dominant, with their opponents Fortuna Düsseldorf unable to muster even a single shot on target.

At the bottom, things continue to look bleak for Hannover and Stuttgart. The former were easily beaten by Hoffenheim and, whilst the latter put on a better display against Leipzig, it was still not enough to get anything from the match.

As ever, we discuss all of the matches in detail. We then move on to our In Depth section, where we looked back at the life and times of Rudi Assauer. The former Borussia Dortmund and Werder Bremen player, as well as Schalke Sporting Director, unfortunately passed away on 6th February. It was only right that we paid homage to a Bundesliga legend, and one of its biggest characters.