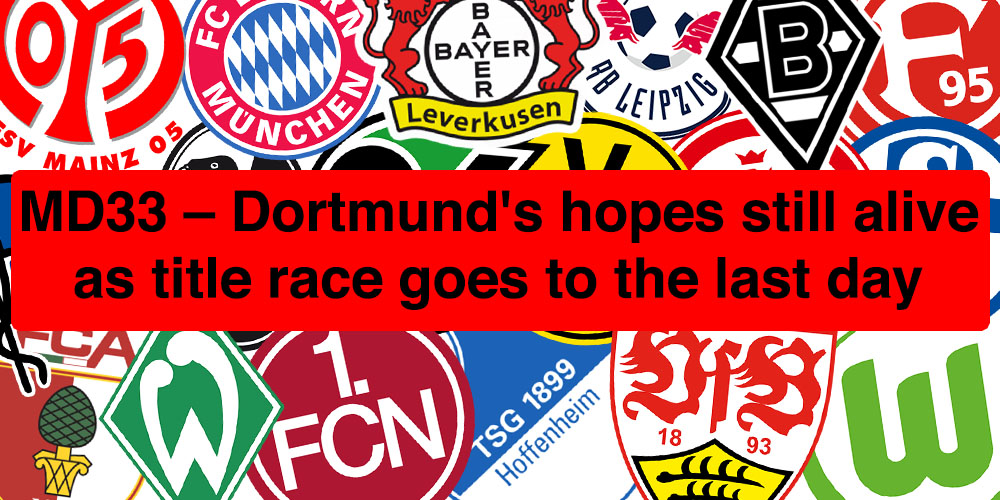 For the first time since 2010, the Bundesliga will go down to the final day! That is thanks to Dortmund’s close 3-2 victory against Fortuna Düsseldorf and Bayern’s 0-0 draw against RB Leipzig. Munich could have secured the title when Leon Goretzka put his side 1-0 up, but VAR came to Leipzig and Dortmund’s rescue to keep it goalless.

At the bottom, at least, everything has been decided. Both Hannover and Nürnberg will be playing in the 2.Bundesliga next season, with the latter losing 4-0 at home to Borussia Mönchengladbach, and the former’s 3-0 win against Freiburg coming far too late to save them. Stuttgart will be in the relegation play-off against the third-placed team in the second tier, which will either be Paderborn or Union Berlin.

In the race for the Champions League, three teams are still in with a realistic chance of fourth spot. Mönchengladbach have the advantage right now after their Nürnberg victory, but Bayer Leverkusen and Eintracht Frankfurt are breathing down their necks going in to the final day.

As ever, we cover all of the latest matches. Once again, with the amount of thrilling action from the past matchday, there will be no In Depth this week.