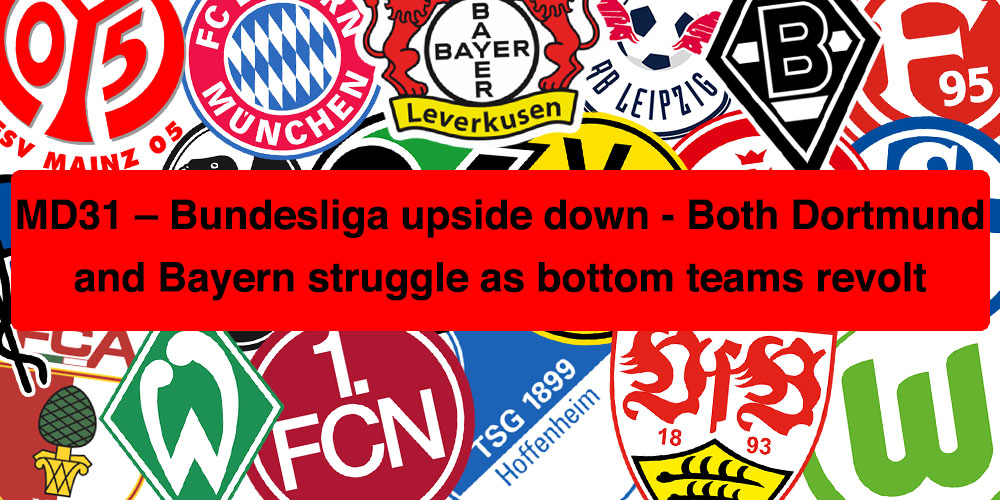 The Bundesliga is truly the gift that keeps on giving. There were 28 goals and plenty of action during matchday 31, especially in the title race that continues to enthrall.

First up, Borussia Dortmund had the chance to make Bayern Munich feel the pressure, with BVB playing first during the Konferenz on Saturday. However, the Revier Derby is never an easy game, and Schalke were never going to roll over for their enemy. In the end, they didn’t just make it difficult for Lucien Favre’s side: Schalke ran-out 4-2 winners. Marco Reus and Marius Wolf getting sent off didn’t help, but it is hard to deny Schalke deserved their win.

Dortmund’s loss opened the door for Bayern to move in to a four-point lead. Yet, despite playing strugglers FC Nürnberg, they were only able to come away with a point. And it would have been worse had Tim Leibold converted the last-minute penalty awarded to Der Club. Bayern now lead by two, with three to play. More importantly, the title race is still alive.

We cover all of the weekend’s action, as normal. With the amount of astonishing moments to get through, there is no In Depth in this week’s show, but it will return next week.